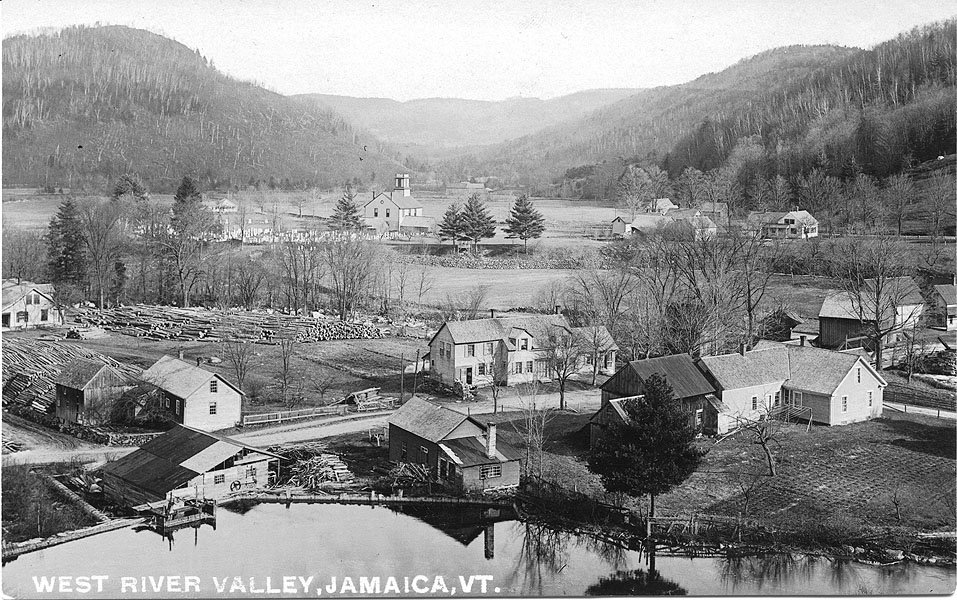 Sculpted by the last ice age, the topography of Vermont was forever altered. Glaciers gouged out valleys and carved mountains that were much steeper and higher than they are today. Erosion led to fertile valleys in the lowlands and to the rocky terrain that characterizes much of the area now known as Jamaica. In Jamaica one can find gneiss rock formations such as Ball Mountain and Attridge Mountain. High terraces above the West River reveal banks of ancient glacial streams. These are a testament to the extraordinary forces that shaped the environment we enjoy today.

This area of Vermont was largely uninhabited in early history and used by native peoples primarily for hunting and fishing. Early travel routes passed through the Jamaica area, beginning at the Connecticut River and following the West River. Called “Wantastiquit” (in the Algonkian language “top place of the river”) is a reference to the fact that the West River makes a major contribution to the Connecticut. These routes followed the rivers across the mountains eventually to Otter Creek and north to Lake Champlain.

In the colonial period, what is now Vermont was disputed territory, with land claims rising from both New York and New Hampshire. The original grants for this area were issued by the Royal Governor of New York in 1767 and 1772 and were for two towns. In 1777 the Independent Republic of Vermont was established and in 1780, ignoring the previous grants, gave charter for “a tract of vacant land within this state which has not heretofore been granted “. The Charter goes on to say “that the same be and is hereby Incorporated into a Township by the name of Jamaica”. The grant encompassed fortytwo square miles. The land lies at an altitude ranging from 688 above sea level along the West River to 2,542 feet on The Pinnacle. There were sixty-seven grantees listed on the Charter, and many of those names can be found among Jamaica’s residents today. Jamaica is one of only two civic entities in Vermont whose modern name is derived from a Native place name, in this case the Natick word for “beaver”.

The earliest settlement of the town was along the West River near the Wardsboro Bridge, now called East Jamaica. It was here that the first school was established in 1791. The step-by-step building of roads and bridges pointing towards Manchester to the northwest moved settlement westward so that by 1800 it appeared that the town center was moving. Within the forty-two square-mile township of Jamaica there developed as many as ten separate hamlets surrounded by outlying farms, all linked to Jamaica Village by a network of roads. Eventually there were as many as 14 one-room schools which served the families in the outlying areas.

In the first quarter of the 19th century Jamaica Village assumed increasing importance as a center, largely for topographical reasons. Located near the confluence of the West River and Ball Mountain Brook, the area offered a strategic location for bridges, dams and mills. Along Ball Mountain Brook alone there were numerous dams, each providing power for at least one mill. The first store “Noon House” was built in 1803. The popularity of “Noon House” led to the building in 1814 of Jamaica House, which provided a convenient overnight spot for travelers at the mid-point between Manchester and Brattleboro.

The economy of Jamaica, like that of so many Vermont communities, prospered with the introduction of Merino sheep in the early 19th century. The Spanish sheep flourished on the rocky hillsides, and as their numbers increased, open land and bare hillsides replaced the forests which had characterized the earlier landscape.

Prosperity did not last. The depression that followed the Civil War and the decline in the wool market took their toll on the local economy. Population decreased. The rivers that had propelled the economy also ravaged its infrastructure. In 1869 a great flood carried away “a mile of bridges” and damaged every dam on Ball Mountain Brook. During this period Jamaica and other towns in the West River Valley bonded together in a venture that was seen as the salvation of the area’s economic woes, the West River Railroad. Originally chartered in 1867, the proposed railroad was to run from Brattleboro to Whitehall, NY. In 1877, financing provided by the valley towns moved the languishing project forward with the first segment from Brattleboro to Londonderry. Although it was never extended further, the railroad provided valuable public transportation for the lower West River Valley until the 1930’s, by which time automobile ownership had become almost universal.

The high fields once grazed by sheep have returned to forestland. The mills and dams that once fueled the local economy are gone. Gone, too, are most of the hamlets. East Jamaica, Rawsonville, and Jamaica Village remain as the population and business centers of the Town. The basis of our economy has shifted dramatically, but our land and streams and our historic village remain. In 2006, the Town of Jamaica applied for and received Village Center Designation Status for Jamaica Village from the Vermont Department of Housing and Community Affairs. The Village Center designation status recognizes and encourages local efforts to revitalize Vermont traditional village centers. Jamaica Village is host to several town festivals, civic and recreational facilities, as well as several local businesses. In addition, the Town of Jamaica was designated as a Historic Village in 1974.

Adapted from Hometown Jamaica by Mark Worthen, a longtime resident of Jamaica.